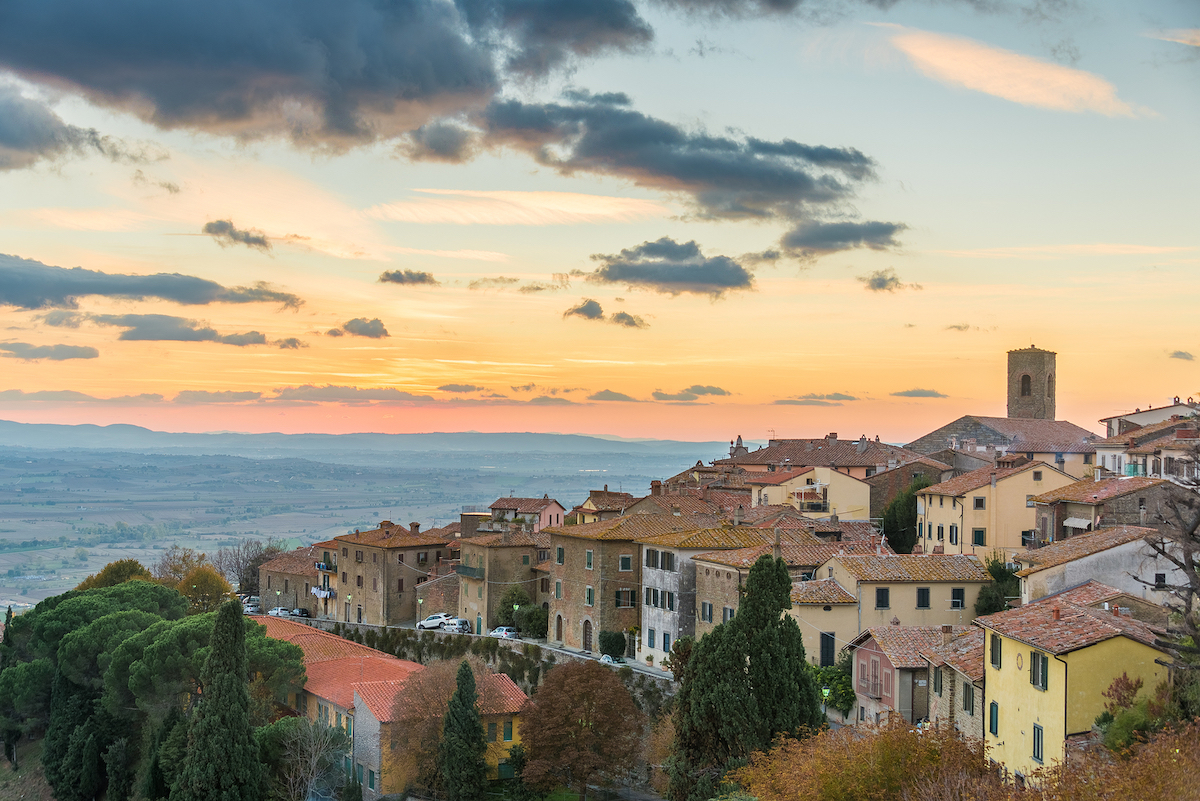 There is just something about the bewitching landscape of Tuscany that has long inspired writers from the time of Boccaccio to the modern day: just think of Francis Mayes’ 1996 literary bestseller Under the Tuscan Sun. What better way to discover Italy than through literary personalities who have not only traveled through this immense and layered region, but who have also penned their perspectives for you to read before you set off on your own journey?  If you love Tuscany and books, this guide will have you following my list of personal fictional favorite reads into real-life landscapes in beautiful Tuscany. The Italian scenery in Tuscany inspired novelists like Mayes, Iris Origo, and Marie-Henri Beyle (better known by his pen name, Stendhal). 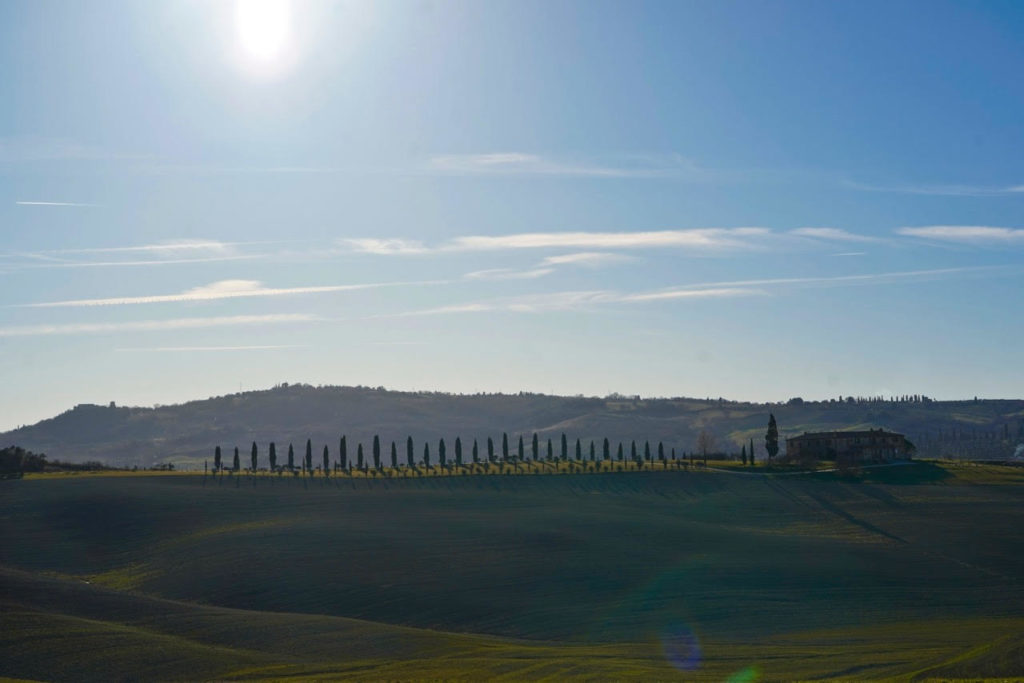 Ask any true Tuscan expert their opinion on some of the most beautiful corners of the region and invariably Val d’Orcia will come to mind, with its rich, colorful valleys, superb wines and lovely hill-top towns perched high above some of the prettiest views in the entire country. Well before Val d’Orcia became a favorite on the tourist trail, one person who explored the area was author Iris Origo (also known as the Marchesa of Val d’Orcia), a wealthy, young British heiress born in 1903. Her 1947 novel War in Val d’Orcia is based on her time in the war-ravaged Val d’Orcia during the Second World War. 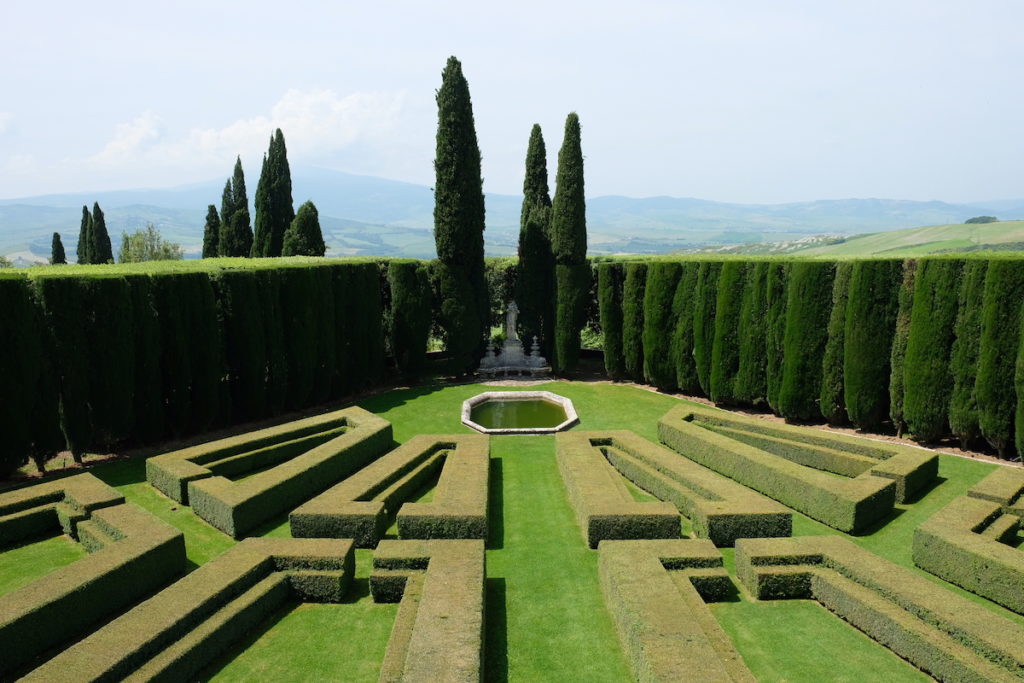 Together with her Italian husband, she bought and restored a 16th century historic estate called “Villa La Foce,” located south of Pienza. La Foce would eventually become one of the most beautiful and noted gardens in all of Italy thanks to their tireless work and innovative ideas. Meanwhile, Origo and her husband were credited with establishing many services that previously didn’t exist in their local community, such as a nursery and on-site school at the estate. They also provided shelter for those escaping during the war. For a closer look, pick up her autobiography, Images and Shadows. To get an outside perspective on the fascinating biography, Iris Origo: Marchesa of the Val d’Orcia by Caroline Moorehead is also well worth a read.

When visiting Iris Origo’s Val d’Orcia, here are a few sites not to miss: Pienza, a village that Iris once called “one of the most perfect Renaissance cities,” the Roman-era spa town of Bagno Vignoni, and the hilltop town of Montepulciano. La Foce most certainly warrants a visit of its own. You can visit the gardens from March 3rd to November 30th, every Wednesday afternoon and every weekend. Tickets cost €10 per adult and private visits can be arranged. 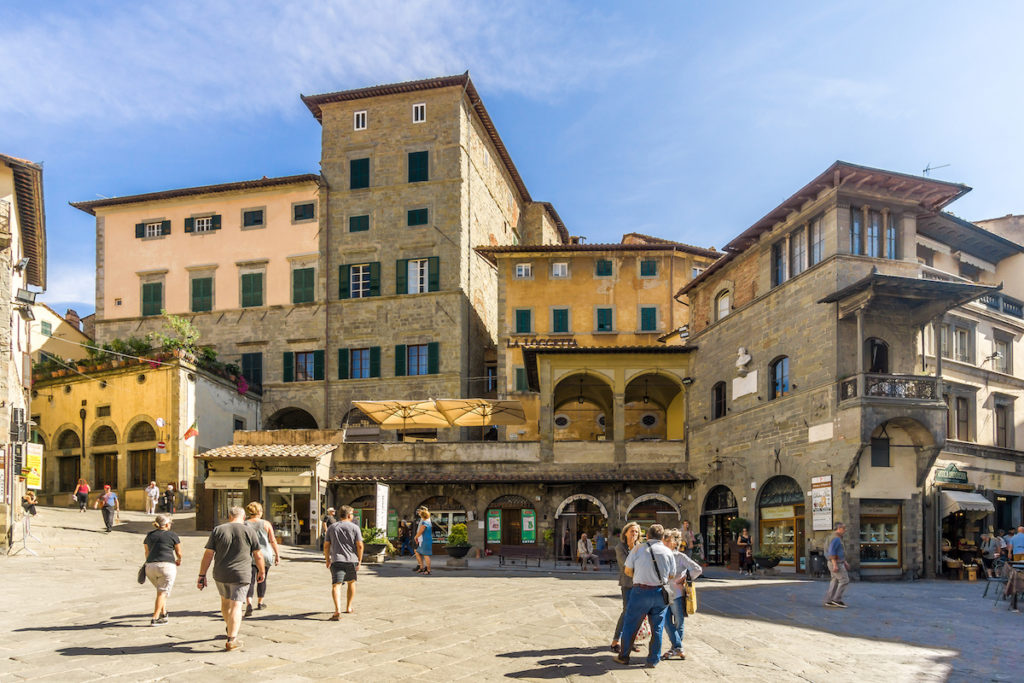 At the Place of Republica in Cortona. Cortona is a town in the province of Arezzo, in Tuscany.

One of the most beloved books about Tuscany is the touching memoir of Francis Mayes, Under the Tuscan Sun. The book is about buying, renovating and living in an abandoned farmhouse – the ultimate fixer-upper’s dream. It inspired a blockbuster film starring Diane Lane, who played the role of an American escaping to discover a new life in Italy. It also served as inspiration for many souls wanting to embrace adventure in the beautiful country. Many of Mayes’ loyal reader’s flock to visit Bramasola, her renovated farmhouse near Cortona, and the hilltop Tuscan village nearby that boomed in popularity after both the book and movie exploded worldwide. Luckily for starry-eyed travelers today, Francis Mayes has a new book: See You in the Piazza: New Places to Discover in Italy. Slated to be released on March 12th of this year, it offers her own personal travel tips for places that don’t often make the top ten lists.

Be sure to visit one of Francis’s favorite museums in Cortona, the MAEC (Museum of the Etruscan Academy and of the City of Cortona) to get an idea of the area’s rich archaeological Etruscan history. Indulge in a stroll through Piazza della Repubblica, which stands on top of a former Roman forum and is featured in one of the Under the Tuscan Sun film scenes. It remains the undisputed heart of the city. Piazza Signorelli, on the other hand, is home to a lovely and bustling weekly market every Saturday morning, where locals meet for gossip and shopping. If you still have time or want of discovery, Cortona is only a twenty-minute drive from nearby Lake Trasimeno. Plan a lakeside lunch and a quick visit to walk around the well-preserved medieval village of Castiglione del Lago. 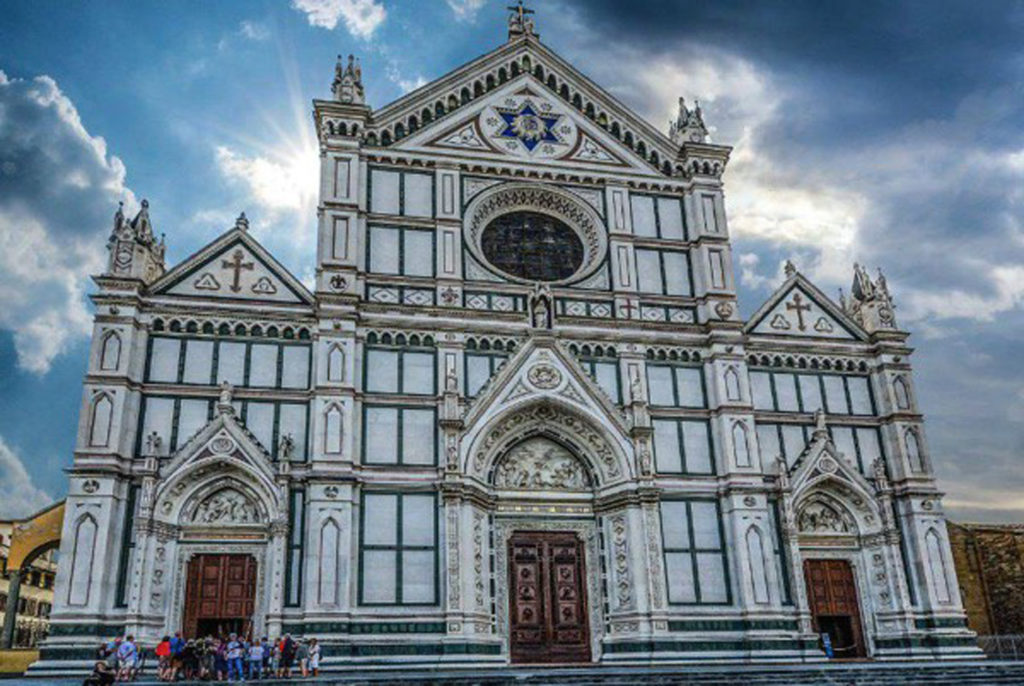 When 19th century French novelist Stendhal first set eyes upon the wonders of Santa Croce Basilica in Florence, he said:

“There lay Machiavelli’s tomb, and next to Michelangelo, rested Galileo. What an astonishing collection of men! Looking on Volterrano’s Sibylles frescoes, I experienced the most intense pleasure art has ever bestowed upon me. I was in a sort of ecstasy, absorbed by the contemplation of sublime beauty … I had reached the point of celestial feeling … As I emerged from the porch of Santa Croce, I was seized with a fierce palpitation of the heart; the wellspring of life was dried up within me, and I walked in constant fear of falling to the ground.”

Thus, he coined the term “Stendhal Syndrome,” a certified medical condition often associated with the Renaissance city of Florence, in which people become ill after taking in too much beauty. This affliction became so prevalent that there is a place reserved at the Florentine hospital of Santa Maria Nuova for those who are overcome with emotion.

As a resident of Florence, I can understand how this could be so. Even simple daily tasks require me to walk over the ancient bridge of the Ponte Vecchio, visit a post office adjacent to a lovely stone wall that once encircled the city, or marvel at a panoramic view of grand churches while out on a daily stroll. The beauty here is truly omnipresent and can come to form in the simplest kind of ways – the perfect cappuccino, an elderly person’s laugh, sunshine illuminating the façade of Santo Spirito. Luckily, as bewitching the city may be, for me, it has yet to result in heart palpitations and a fainting spell. But there is not a day that goes by that I don’t appreciate this marvelous place that I get to call home.

To fully appreciate Florence as Stendhal would have liked (you can read his travel narratives in Naples and Florence: A Journey from Milan to Reggio), plan a visit to not only the Basilica di Santa Croce but also the Uffizi Gallery to gaze upon Botticelli’s Primavera and Caravaggio’s Medusa. Don’t forget to take a stroll through Pitti Palace’s Boboli gardens and Bardini. Or how about a wander through Cascine Park, ex-Medici hunting ground and favorite rumored spot of Queen Victoria, for whom a fountain in the park is dedicated. Finally, grab a seat and a thick cup of hot chocolate at Caffe Rivoire for the best show in town, people-watching in Piazza della Signoria coupled with the background view of an outdoor gallery, Loggia dei Lanzi. Surely Stendhal would have approved.