Tuscan Wine from A to Z – Infographic 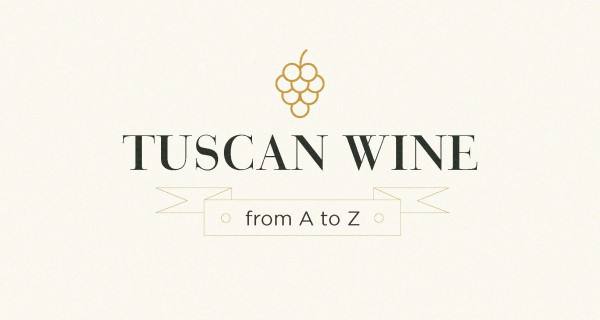 C – CORK. The vast majority of Tuscan wine producers prefer to use traditional corks to over either plastic corks or screw caps. Traditional cork comes from the thick outer bark of the cork oak tree. A bottle of corked wine should be stored on its side to keep the cork from drying out.

D – DOC / DOCG. DOC stands for the Italian “Denominazione di Origine Controllata” or Denomination of Controlled Origin. The appended “G” on DOCG stands for “Garantita” or Guaranteed. Italian wine labeled DOC or DOCG was grown and produced within a certain limited area in a regulated way. These wines are most often regulated based on the use of specific grape varieties, growing methods, winemaking methods, and ageing. The DOCG label indicates that a wine was produced under the strictest regulations. Only a small portion of all wines from Italy earn the DOCG label and are often considered to be elite. There are eleven DOCGs in Tuscany, the two most well-known being Chianti Classico and Brunello di Montalcino.

E – EXPORT. Wine from Tuscany has been exported from the region since 7th century BC when it was believed to be first exported to southern Italy and Gaul. Today, Tuscan wine is exported all over the world. Exports exceeded the €700 million mark in 2013, a record-breaking year for the region.

F – FIASCO. The word fiasco is actually the name of the traditional Chianti bottle, with its round bottom and straw basket around the bottom. The unique round bottom shape was due to the fact that the glass bottle was originally hand blown by the farmers producing the wine. The straw they used had a dual purpose – it created a flat bottom to help the bottles stand upright and it provided a little protection from the heat during the day.

G – GRAPES. Under the right conditions, the juice of squeezed grapes will ferment on its own due to the presence of the natural yeast found on its skin and the natural sugar within the grapes themselves. The yeast consumes the sugars and converts them into alcohol and carbon dioxide – without the addition of sugars, acids, enzymes, or water. Because of this, it is believed that wine was the first alcoholic beverage to be invented.

H – HEALTHY. Some health professionals believe that drinking red wine in moderation may actually be good for your heart due to the antioxidants found in red wine. Wine is also a fat and cholesterol-free beverage.

I – IGT Toscana. The “IGT Toscana” label indicates a wine that is produced specifically in Tuscany but does not follow the regulations of DOC or DOCG wine. “IGT” stands for “Indicazione Geografica Tipica” or typical geographical indication. While this designation is the lowest of the three categories of Italian wine regulated by Italian law, the IGT Toscana label does not indicate an inexpensive or low-quality wine. Super Tuscan wines are produced with the IGT Toscana label.

J – JUPITER. It is believed that the principal grape of Tuscany, Sangiovese, is named for “Sanguis Jovis” which translates from Latin to the “blood of Jove (Jupiter)”.

K – KILOGRAM. One full bottle of wine weighs about one kilogram or 2.3 pounds. Priceless information if you’re thinking of taking a few bottles back home in your suitcase from Tuscany!

L – LEGS. A wine’s “legs” or “tears” are the drops of wine that creep down the side of a wine glass after swirling it. Legs or tears were once considered to be an indicator of a wine’s quality, but they are really just an indicator of the wine’s alcohol content and surface tension. Higher alcohol content wine has thinner legs than those with lower.

N – NOSE. In the world of wine, the word “nose” is synonymous with the word “aroma” or “smell”. Swirling the wine in your glass before you smell is the best way to sense the nose of a wine.

O – OXIDATION. Oxidation is the enemy of wine and a chemical process that starts the minute a wine bottle is opened to the air. The taste of the wine in an open bottle starts to degrade after about three days due to oxidation.

P – PREVENTION. Ever wonder why you see rose bushes planted along the end of rows of vines? While today they are mostly planted for aesthetic reasons, they were historically planted to help prevent loss of the crop due to disease. Both roses and grape vines are susceptible to the same diseases, but roses tend to exhibit the signs of disease first. The roses would act as an early warning of fungal disease, allowing the farmers to treat the disease early before it spread. Today, fungicides are typically applied to vines to prevent these diseases.

Q – QUOTE. According to an old Italian proverb, “non si può avere la botte piena, e la moglie ubriaca”. This is the Italian version of the saying, “you can’t have your cake and eat it too”. Literally translated it means, “one can’t have a full barrel and a drunk wife”.

R – RED. Tuscany has a very high percentage of production of red wine versus white wine – 80% to 20%.

S – SALUTE! Salute is the Italian version of a “cheers”. Italians often say “salute” or “cin, cin” when toasting a glass of wine. The word “salute” means “health” in Italian.

T – TERRIOR. On a very basic level, terrior is the representation of the physical place grape vines are grown through the flavors and quality of wine they produce. The combination of soil type, climate, degree of slope, and exposure to the sun all play into the terroir of a vineyard. The characteristic of a grape variety itself in relation to the geographic location where it’s grown also plays into the concept of terroir.

U – UVA. The word “uva” is Italian for grape. The most common grape vine species grown in Tuscany is native to the Mediterranean region and called vitis vinifera. There are currently between 5,000 and 10,000 varieties of vitis vinifera. Sangiovese is one of these varieties.

V – VENDEMMIA. Tuscan vendemmia, or grape harvest, occurs every year during the months of September and October. The exact dates of harvest for each vineyard vary widely depending on the weather and the type and maturation of the grapes.

X – XANTHOS. Xanthos is the Greek word for yellow and is pronounced similarly to the word “santo” in Italian. The Florentine origin story for the name of the Tuscan wine Vin Santo dates back to 1439 when a Greek priest referred to the wine using the word “xanthos”. The Florentines thought that the priest was saying the word “santo” and started calling the wine Vin Santo from that time onward.

Y – YIELD. A yield is a measure of the volume of wine that is produced per unit surface of vineyard, often in the units of hectoliter per hectare. Yield is often regulated as it is seen as a measure of quality, with lower yields associated with higher concentrated flavors. For example, regulations stipulate that the yield of Chianti Classico wine from grapes cannot exceed 52.5 hectoliters (5,250 liters) per hectare.

Z – ZONE. According to the Chianti Classico Wine Consortium, the Chianti Classico area was delimited in 1932 by ministerial decree which described the area as the “the oldest zone of origin”. The boundaries of this original zone contain 71,800 hectares and have remained unchanged since that time.