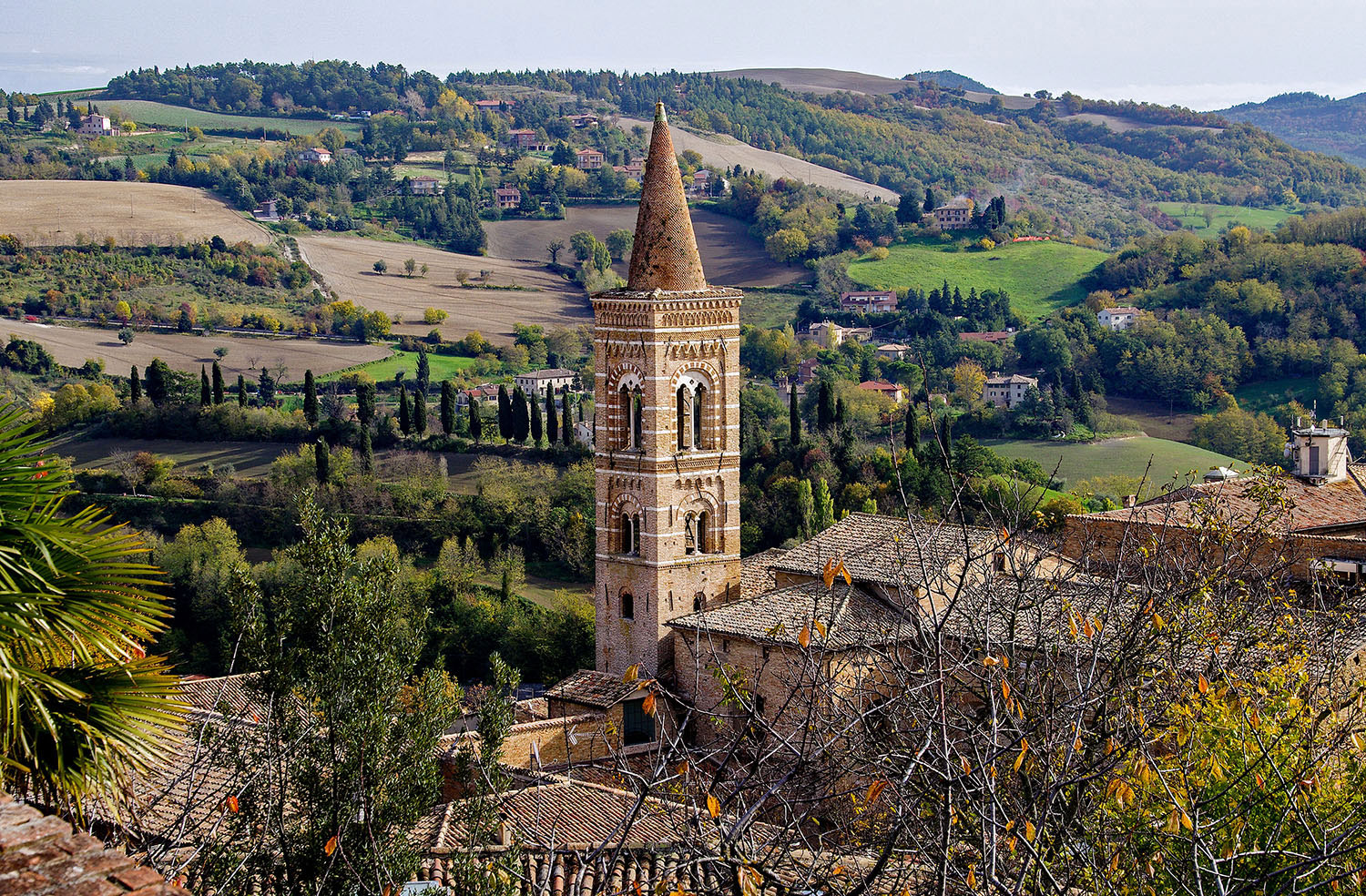 With overtourism swelling Italy’s great cities it can be easy to write off the country as one large Disneyworld heaving with large groups of tourists all angling to get the best “hey, I was there once” photo, but instead, what you really should be doing is exploring some of its other, quieter regions instead. The central Italian region of Le Marche has long been a beloved destination for those in the know seeking to escape crowds and soak in a slow travel atmosphere.

Le Marche is a central Italian region that borders the former papal states offering 100 miles of coastline on the Adriatic side with beachside resorts, luscious countryside panoramas combined with cozy mountainside hamlets. There are a number of notable “Marchigiani” that you might have heard of, namely Moto GP motorcycle champion Valentino Rossi, the artist Raphael, the poet Giacomo Leopardi. Personally, I have always found this region to be a refreshing surprise and the people both humble and formidable, it’s a place that feels both secluded and friendly. The food delicious, seasonal and hearty – the terroir shines through on the simplest of dishes and they produce notable wines to boot. The tricky part can be getting there as you have to rely on slower regional trains or a car ride through windy roads – however the end destination is always more than worth the journey it takes to get there.

Where to go and what to see in Le Marche

Ancona is the easiest to reach in terms of airports (or even ferry boats) in Le Marche, while considered a rather average town by regional standards I actually say give Ancona a chance. Visit the local civic museum and head up to the Cathedral of San Ciriaco that overlooks the entire city; its impressive façade lies guarded by two large, marble lions.

In the same province lies a pearl of the Adriatic, the breathtaking seaside landscape of Monte Conero is as impressive a place as it gets, home to a number of beautiful pathways with natural flora and fauna and beaches reachable only by foot or boat such as the iconic Due Sorelle. Sirolo, Portonovo and Numana are great places to base in the area and I highly recommend exploring the plethora of trails in the area for Nordic walking, hiking, mountain biking and beach life.

Also in the province are the underground cave networks of Frasassi (part of the Natural Regional Park of the Gola Rossa and Frasassi) in the small town of Genga, a beautiful natural limestone formation with stalagmites and stalactites created through centuries of water erosion maintaining a cool temperature of 14 Celsius. Cave visits last around 75 minutes and there are a number of routes you can take depending on time and expertise, tickets best booked in advance.

For lovers of artisan culture, Fabriano is home to paper artisans who have been creating quality carta since the 13th century. You can visit a museum dedicated to the craft and make sure to spend some time just wondering the ancient streets of this extremely charming city.

Ascoli Piceno is a Renaissance dream, an elegant town with its Piazza del Popolo renovated in the 16th century considered “Italy’s living room”, albeit quite an elegant one!

For two weeks in summer, the Rossini Opera Festival in Pesaro kicks off a musical repertoire celebrating the genius of the great Gioachino Rossini – transforming the town into a magical atmosphere. The town itself is quite interesting and well known for its “two sides” one of which is a popular seaside resort town and the other, a well preserved medieval town.

The seaside town of Senigallia hosts a really unique summer jamoboree festival when the entire town comes alive with this event that celebrates American music and culture from the 40’s and 50’s. Think live music concerts, vintage car shows, a dance camp and plenty of people sporting vintage looks.

The Sibillini national park is near and dear to my heart, in fact one of the first trips Nico and I did as a couple was to this mysterious place overflowing with nature and legends and witches and wizards. There is everything from mountain peaks to floral-filled hillsides and is a much less visited mountain destination (also due to a devastating earthquake that hit the area in 2016). I stayed in the town of Amandola, a lovely little town that is a great base to explore the mountains as well as the charming village of Montemonaco. Sibillini is also home to the one and only Pilato Lake {uniquely shaped like glasses} and it is the only glacial lake of the Apennines home to a strange, unique species, Chirocefalo Marchesoni, which only exists here in the world.

There is no doubt that the mighty Urbino should be on your list of places to visit in Le Marche, its presence during the Renaissance is reason enough to come appreciate one of Italy’s greatest art cities perched on a hilltop. Most of its architectural landscape went up during the Dutchy of Federico da Montefeltro in the late 1400s and it is the birthplace of painter Raphael whose house still stands. The Palazzo Ducale is a must visit, undoubtedly one of Italy’s finest galleries with works by  Piero della Francesca, Paolo Uccello, and Raphael.

What to eat (hint: everything!)

There is so much to enjoy in Le Marche in regards to cuisine so make sure to sample the numerous local specialities, such as the fossa cheese, white truffle of Acqualagna, cured meats and olive oil from Cortaceto, Pasticciata alla Pesarese (veal cooked with white wine, herbs, pancetta) and brodetto or fish broth made with all sorts of marina life which you can find all kinds of variations along the coastline.

Maccheroncini di Campofilone is a type of pasta native to Le Marche, think thin ribbons consisting of egg and durum wheat semolina flour that dates back 600 years served with the sauce of your choice.

Mussels are very popular here but make sure to call them “moscioli” which is the local term for this seafood favorite. Lasagna fans will love Vincigrassi, made with egg pasta and variations depending on the cook and often with lamb (I love it with truffle). Fried stuffed olives are a speciality from the Ascoli Piceno area of Le Marche and in Macerata you’ll find ‘ciauscolo’ a spreadable sausage (flavoured with fennel, garlic and vino cotto) often served on toast. Also worth trying is the delicious rabbit cooked with fennel (coniglio in porchetta). Wash it down with a crispy glass of Verdicchio, Passerina and Pecorino wine at one of the region’s many wineries.

To take this cuisine home with you, I highly recommend purchasing Cucina of Le Marche

By Fabio Trabocchi, which provides a handy overview of the region’s best dishes.

If it’s beach life you crave, the summer months are a great time to come but expect to not be alone as many locals and returning Marchigiani will be vying for spots along the majestic coastline as well (especially in July and August). Hence, if you can come in May or late September you will find more options and less crowds along the Adriatic coastline and this goes for everywhere in the region. November is the time to come for truffle-lovers who can arrange a hunt in the Sibillini mountains. There are also festivals dedicated to the fragrant tuber at Sant’Angelo in Vado (October) and Acqualagna.