Garfagnana: What to see in Secret Tuscany 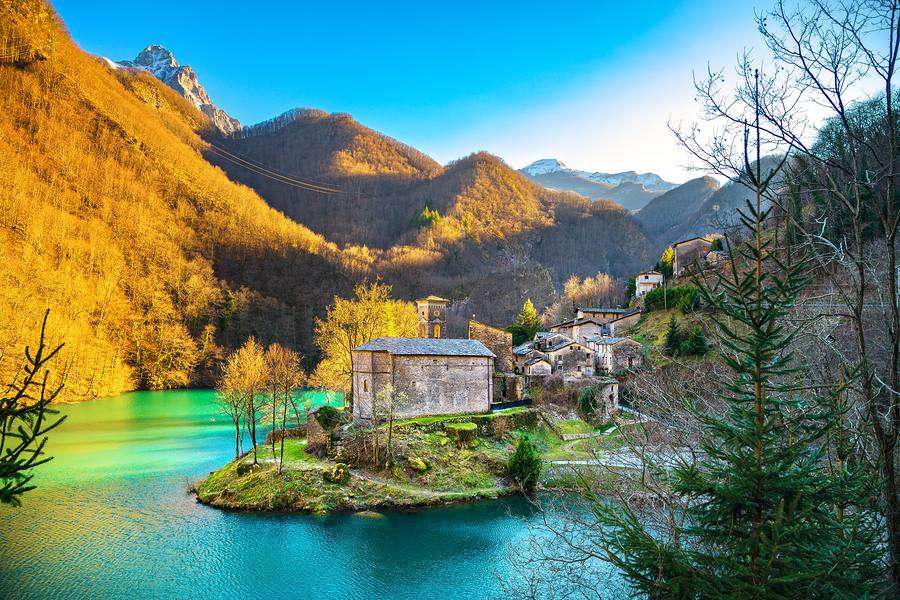 When it comes to exploring Tuscany, most people focus on the art cities of Florence, Pisa and Siena before continuing their grand Italian tour. However, those who really want to enjoy the quiet glory that comes with its more secret escapes, head instead to places like Garfagnana north of Pisa and Lucca. Consider it a much-less crowded alternative than other areas of the region, when you’ve quite literally have had enough of “under the Tuscan sun”.

This area in the Serchio Valley near Lucca has all of the elements of Tuscan countryside you would normally expect, just in a wilder context. With an abundance of thickly-wooded mountains, fortresses and clear-water springs, there is quite certainly a rugged feel to the area between the Apennine mountains and the Alpi Apuane, and one that tends to attracts those who love to be “into the wild”. The culinary scene is nothing less than impressive, with hearty local dishes featuring mountain fare like chestnuts, wild boar and mushrooms making long hikes in the mountains a doable feat with a full belly.

I remember the first time I visited the area myself, after leaving an oppressively crowded center of Florence, the welcome sounds of nature and its peaceful call to stay stayed with me for my entire 11 years in Italy. My husband and I find any excuse to return, either for a weekend escape from the city or just to enjoy convivial countryside cheer at one of its food festivals or traditional sagre. If you consider yourself an intrepid traveler who is looking to escape the crowds of packed Italian cities, wild Garfagnana just might be the place for you. Here’s what you don’t want to miss. 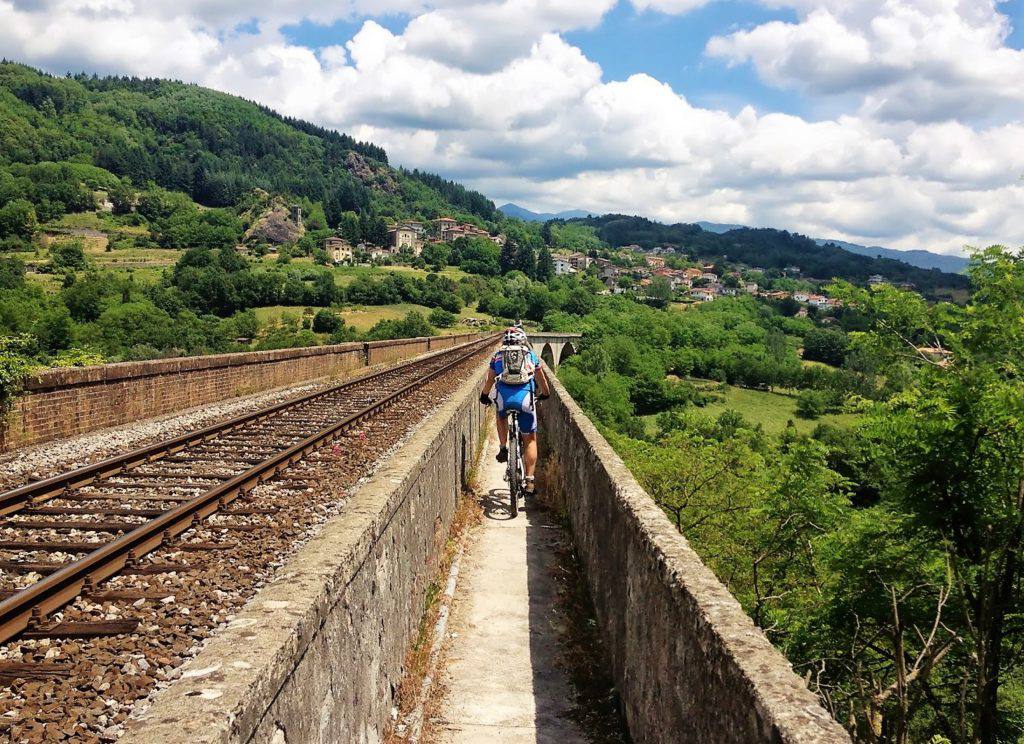 Cycling in Garfagnana – photo by Daniele Saisi on Wikiloc

For those who love to forage in lush forests and cross pebbled rivers, this is the place for you. This is an ideal area (especially the Orecchiella Natural Park and Pania del Corfino) for any hiking enthusiast, horseback rider, cyclist or to simply discover its mysterious caves, such as the Grotta del Vento, located near an ancient monastery, the Eremo di Callomini. In the winter, you can ski at Passo delle Radici, Casone di Profecchia and Careggine, which are all ideal resorts for beginners.

For a true adventure, try the Garfagnana Trekking tour, created and promoted by Unione Comuni Garfagnana in 1983. It consists of a nine-day loop starting from Castelnuovo di Garfagnana and reaching the most important summits of the two mountain ranges.

Towns to Explore in Garfagnana 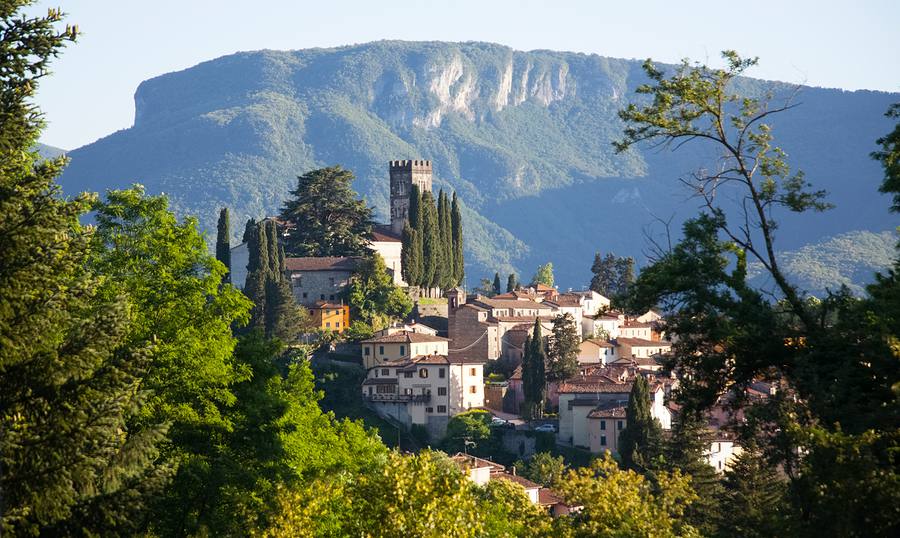 View of Barga, one of the most beautiful villages of the Garfagnana area

Throughout history, the villages of the Garfagnana were heavily fought over, resulting in an area lush with castles and fortresses. While not all remain standing today, it does make for a rather picturesque route (and very nice on an e-bike). The main town in Garfagnana is Castelnuovo di Garfagnana, a small but adorable stop on your Garfagnana tours. In the main square stands the historic Rocca Ariostesca, a fortress named after poet Ludovico Ariosto who governed the provinces in the 16th century, and La Fortezza di Mont’Alfonso can be discovered following the “la passeggiata degli innamorati”.

Borgo a Mozzano is best known for its “cursed” Ponte al diavolo (Ponte della Maddalena) or devil’s bridge, a formidable medieval arched walkway over the Serchio River, once used as a pathway for pilgrims along the famous Via Francigena trail. This is an especially fun place to visit around Halloween when the whole town dresses up for the occasion.

Barga is a hilltop walled village slightly outside of Garfagnana but one that typically captures the hearts of people who visit once passing through its gates Porta Reale, Porta Macchiaia. The village itself dates back to the Langobardic era of the Early Middle Ages, a place once known for manufacturing textiles. Home to a shrine honoring Italian poet Giovanni Pascoli, notable attractions include the Romanesque Cathedral named Collegiata di San Cristoforo, Chiesa del Santissimo Crocifisso and Chiesa della Santissima Annunziata, and the Teatro dei Differenti. Funny enough it also has a surprising and little-known link with the country of Scotland, with Scottish settlers migrating back and forth for the past 180 years (I can’t help but think of what other Italian towns would think of an ice-cold Irn Bru).

The area of Piazza al Serchio is dominated by the Parish Church of San Pietro e Paolo and is home to events throughout the year. One of our favorites is the San Pietro Fair held on the Sunday closest to June 28th, an excellent occasion to taste some of the town’s best products and typical dishes. Additional small towns worth adding to your itinerary include Camporgiano, Gallicano, Pieve Fosciana and Villa Collemandina.

For the curious sort, you might want to visit a ghost town buried under 34 million cubic meters of water. The town was called Fabbriche di Careggine and the residents were moved nearby to Vagli Sotto in order to build an artificial dam, Lago di Vagli. Today, the ghost town re-emerges from the water only when the dam is emptied during maintenance: until now, this has only happened four times, in 1958, 1974, 1983 & 1994.

Foods You Don’t Want to miss 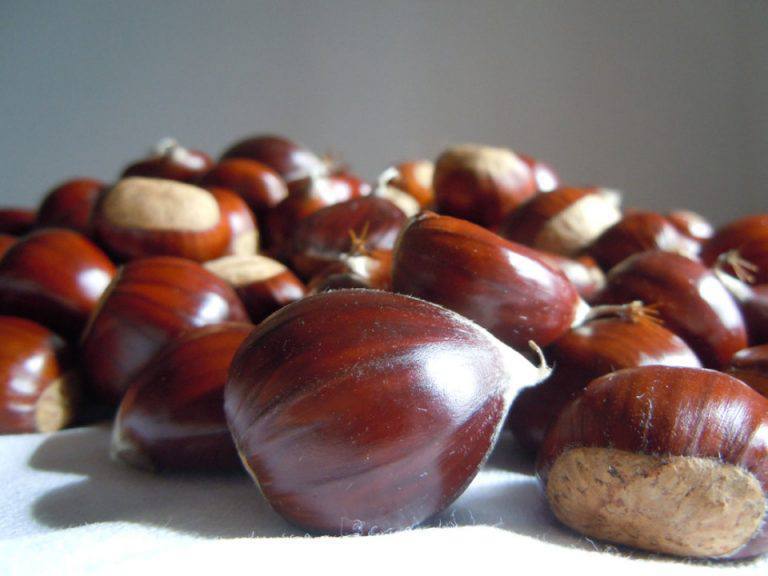 The food in Garfagnana is known to be hearty peasant fare, wild boar, grains, prosciutto, cheese, honey, mushrooms. With an abundance of chestnut trees, expect the beloved castagna to make the menu in various forms throughout Garfagnana. In fact, the cultivation of chestnuts trees for their nuts goes back to around 1000 CE and the flour from here has coveted DOP status. Spelt or Farro della Garfagnana IGP is an ancient local grain that is a must-try, especially in winter soups and autumn salads. For quality pork products, you won’t find better than Antica Norcineria Bellandi, home to four generations of talented norcini located at the foothills of the Apuan Alps. In Barga every Christmas you’ll find the traditional cookies “I befanini di Barga” made with shortbread flour, almond paste, sassolino and alkermes.

During the summer the Garfagnana area plays host to a number of festivals worth visiting including a gastronomic adventure in the tiny villages of Sant’Anastasio and Petrognola decicated to farro. In Castelnuovo di Garfagnana you can expect annual summer music festivals in July. Barga is a great to visit in the first few weeks of August for both its annual jazz festival and a fish & chip festival playing homage to its Scottish side. During late October, early November there are several food festivals celebrating the versatile chestnut.

How to get there

It is possible to reach areas of the Garfagnana by train or bus to the town of Barga, reachable via a 40-50 train ride from Lucca, or 40 minutes drive from Lucca. We recommend renting a car to get the most out of your trip.